A trip over to my Hesse-Engelburg blog will show a little more work done this weekend.
Posted by Snickering Corpses at 3:19 PM No comments:

Following in the footsteps of some others on the 1/87 Military Models Yahoo group, I decided to line up all my WW2 vehicles for a group photo. On the left side, you can see various artillery pieces, a couple of Paul Heiser models that are still in progress (the white items), a stray Roco Marder I, a Tiger II and Panther from a Roco knockoff company that need new track units, and some odds and ends of spare parts. More comments after the photo. Click on the photo for a larger view. 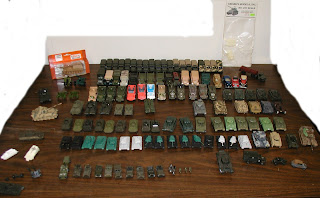 As you can see (and has been mentioned on this blog), my vehicles are a mixture of true 1/87 vehicles from Roco, Boley, Eko, and others, plus a mix of die-cast and plastic vehicles that happen to be in generally the right size. The topmost trucks are all modern M998 trucks from Maisto, but I use them quite happily in my WW2 forces of all sides. If I eventually get enough Roco trucks of the correct nationality and era, I may phase them out, but for now they suit me fine. Similary, the third row down shows a mixed bag of diecast US half-tracks from at least three manufacturers, most of them the sort with AA guns. These are also happily used as troop transports of all sides as needed, until such time as proper replacements can arrive. Given that the Roco/Heiser halftracks tend to sell from $12-30 each, this will be a while.
I still don't know who makes the undersized cheap plastic panzers near the front. These too may eventually be replaced when I can afford the proper 1/87 vehicles. The very front row has several jeeps, a number of which are missing parts (which is their state when I bought them). It also has the probably gem of the Roco part of my collection, a lone Churchill.
Posted by Snickering Corpses at 2:38 PM No comments:

Having done some random bits of progressing the past couple of days, I decided it was time for one of the traditional cluttered workbench pictures, plus some updates. As usual, click on a picture for a larger version. First the cluttered workbench. Right now, there's nothing else demanding the bench, so I've got my wargaming stuff spread out on it, so I figured it was a good time to take a picture. It's actually slightly more cluttered now, as that shot was a couple of days before some of the latest work. Those who follow my SYW ImagiNations can see some of the primed and partly painted figures off to the right side of the desk. Top center is Delta Ceramcoat paints, with Vallejo paints at top right. 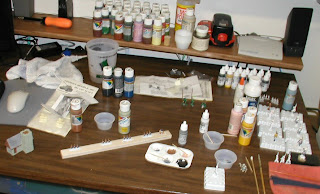 Next up, we have further progress on the 10mm ACW figures. I painted blanket rolls on two more stands, going with Vallejo 869 Basalt Gray this time.

I also decided to begin painting on the remaining two buildings that were still unpainted all this time. The next picture shows the JR Miniatures 15mm church from their Napoleonic French line. The stonework is done with Delta Ceramcoat 2442 Stonewedge. I'm still not totally decided if I like this. The doors and wooden trim are in Delta Ceramcoat 2055 Autumn Brown. For the roof, I'm thinking of going with a dark red color. 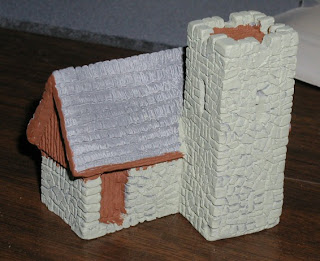 With a bit of left-over Autumn Brown from the above, I painted the spear shaft of the leftmost Warrior Frog in the next picture. 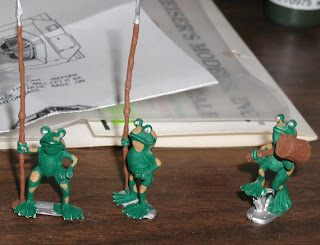 Next up, we hav the other "Servant's Quarters" building from JR Miniatures, again from their 15mm Napoleonic French line. I've undercoated it with my usual white acrylic gesso. I'm thinking of going for a blue shade possible for the walls of it; haven't decided for sure. 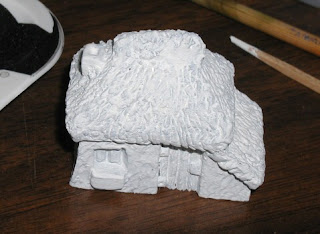 And last but not least, I've finally gotten up the courage to take one of the Paul Heiser 1/87 scale British Scout Carriers out of its bag, trim/sand/snip/poke the flash from (most of) it, and get an undercoat of white gesso on it. I've got another one of these to go after it, and want to get a few more to equip my partial carrier platoon. A look back at the workbench photo will reveal a German Sdkfz 250 also awaiting painting and assembly. 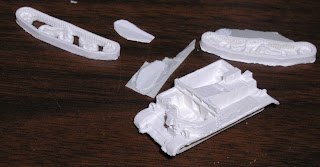 Posted by Snickering Corpses at 5:12 AM No comments: