Yesterday allowed me to get a little further on painting, and I've got some fresh photos to show for it. I actually was able to paint one stand several days ago, since the last post, but didn't get a photo of it. So now I have one stand that's ahead of the others in the painting steps. As usual, click on the photos to get a larger view.

Step 4: Trousers
For these union troops, I'm using Delta Ceramcoat 02106 Bonnie Blue as the trouser color, and I've begun using a new technique for these, which I used to use in my teen years on 1/72 scale figures. Instead of a paintbrush, I'm using a toothpick. While the shaking of my hands still causes paint where I don't want it some, it seems to cause a lot less trouble than stray bristles off the paint brush.

Step 5: Jacket and Kepi
I decided on using Delta Ceramcoat 2083 Navy Blue for the coats and hats on this stand, but I'm pondering the possibility of using some other dark blues on various stands. Initially this will likely be to learn what I like, but it also leaves some room for variation in dye jobs and wear to the fabric. You can see where I slipped and got a bit of the dark blue on the rifle barrel while painting the kepi. This will be corrected later.

Posted by Snickering Corpses at 11:06 AM No comments:

A couple of days ago provided another opportunity to get a little painting in. I started on the next step of the 10mm ACW figures, then had some paint left over so I went ahead and dug out a couple of other figures. As usual, click on the photo to zoom in.

Step 3: Skin
For step 3, I started on faces and hands, and backs of necks in some cases, for my 10mm ACW figures. I wasn't very worried about being neat, beyond trying not to paint over the rifles too much, but stages to come may require more care. I have some ideas to try.

I also had a chance to work on face and hands for my lone test figure for WW2 British plastic troops. I suspect I'll change my technique up some the next one I paint, but I'm reasonably pleased that the figure is actually somewhat usable in that state. I intend to do more, but for the period, a simple basic color and distinct face and hands is not a bad basic setup. 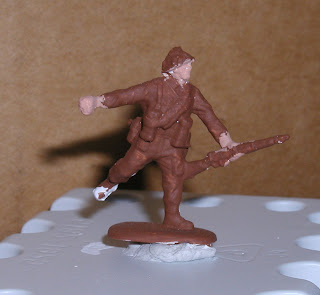 Meanwhile, check out my Hesse-Engelburg and Ober-Schweinsberg blogs to see the other two figures I worked on. For those of you not familiar with them, just click the "View my complete profile" link at the top of this page and scroll down to find links to them.
Posted by Snickering Corpses at 8:46 PM 3 comments:

While nothing impressive, I have made a little painting progress in the past couple of weeks. I started painting my 10mm ACW figures, using a technique found on a web forum for 6mm figures. Pictures below of the first two steps. I'm doing 4 stands of 3 infantry plus one mounted officer, though you can only see two of the stands in the photo. They're mounted with drops of white glue onto a spare bit of plywood for handling. I'm pleased with how that's worked out.

Step one: Priming
I've primed the figures, as with all my priming lately, with Liquitex white acrylic gesso. I'm still learning how much to pour out to coat a certain amount of figures.

Step two: Muskets and Horse
For this stage, I've used Delta Ceramcoat acrylic 02054 Golden Brown. The painting guide recommended going a little lighter for small figures than for large ones, so this was one of the lighter browns in my limited paint inventory. The decision to use it on the horse had more to do with having a fair bit of it left over after completing the muskets than out of any plan regarding horse colors.

Meanwhile, this past week's mail brought in several items. I finally managed to free up some cash to pay for a box that Tom had been holding onto for me, so my Roco forces are now augmented by a Roco Opel radio truck, a Roco Sherman tank, and a Roco Elefant tank destroyer. Also in the box were gun trails to complete my Roco US 105mm Howitzer, and a spare M10/36 tank destroyer hull in case I wished to do a conversion from the Sherman. In the end, I decided I had more need of a Sherman to lead my Matchbox Shermans, so it's been put into service as is.

Also in the mail was the result of a trade for about 300 of my 1/72 plastic Napoleonic figures (I still have more if anyone is interested). I know I'd decided to cut myself down to just Western Front WW2, but I ended up in trade with a box each of Airfix Japanese Infantry and US Marines. I can always trade them later, but having also received a couple of Japanese pack mules, I'm pondering doing a small supply interdiction game. Also included were 2 boxes of British paratroopers, a box of Revell Scottish 8th Infantry, and a box of Revell Afrika Korps. I probably won't use these for Africa (especially since I got rid of my other Africa troops), but rather raid the mostly long-trousered figures for variety in my Western Europe forces....and perhaps the option of doing Italian front battles as well. In line with the latter, I added a box of Italian Alpini. I'm still debating whether to cut off the feathers from the mostly helmeted troops so I can use them as regular Italians with my Airfix/Hat Italians. They'd supply badly needed machine guns for them. Or maybe I'll just leave the feathers on so I have the option to mix or to separate. We'll see.
Posted by Snickering Corpses at 11:19 AM No comments: